During the summer months, milk production can drop from 10% to 30%, which is an economic problem for milk producers (St. Pierre et al., 2003). The reduction in milk production is not due just to a reduction in dry matter intake induced by an increase in body temperature, but also to an alteration in the endocrine profile and energy metabolism (Baumgard and Rhoads, 2007), and to other factors that are still unknown (Collier et al., 2008).

It has been shown that, in lactating cows, the greater the milk production at the beginning of the heat wave, the greater the reduction in dry matter intake. The acceleration in the decline of dry matter intake in high-production animals is due to the need to rapidly decrease heat production in order to counteract the thermal overload. This means that the most productive dairy cows in the herd, the fresh cows, will be more likely to have a drop in feed intake, increasing the potential risk for the next lactation even in winter months (Collier et al., 2019). In addition, heat stress induces an increase in metabolic maintenance requirements of between 7% to 25% (NRC 2001).

Fig. 1: Rumination by cows decreases by 60 minutes per day for every 10 points increase in THI above the stress threshold (Mathew Haan, Penn State Extension, 2016).

From a behavioural point of view, the strategies implemented by the cattle are:

These physiological and behaviour responses increase the risks of rumen acidosis:

Indeed, it has been shown that the ruminal pH of heat-stressed cows when compared to thermo-neutral cows is lower both before (9.5% lower; P<0.01) and after (6% lower; P<0.05) the principal feeding (Gao et al. 2016).
In addition, it has been shown (Wheelock 2009) that 50% of the reduction in milk production is due to the drop in feed ingestion. In fact, during heat stress there is an alteration in energy metabolism with an increase in the use of glucose by cells. As a result, the availability of glucose for the synthesis of lactose, necessary for milk production, is lower. Therefore it is important to optimise rumen fermentation to ensure an adequate flow of amino acids and propionic acid in the blood. These substances are used by the liver to synthesise glucose, which is consequently insufficient in phases of stress.

Benefits in milk production and quality

Graph 1. Constant use of live yeast for a successful dairy farm

The reduced fiber intake in addition to increased risk of rumen acidosis, inevitably causes the depression of milk fat content. It has been shown that Biosprint® live yeast (MUCL™ 39885) is able to reduce the risk of acidosis and support milk production and quality.

The benefits obtained by using live yeast remain constant and are consolidated if the yeast is used regularly and continuously, along all during the summer.

Only in this way “long-lasting” negative effects of heat stress can be prevented.
If the average performance of livestock farms is analysed, every year between July and August there is a drop of quantity and quality of milk produced (Graph 2). The return to optimum performance is achieved only in successive months, with a gradual improvement whose rate will depend on various factors specific to each individual herd.

In a herd consisting predominantly of animals with a long lactation period, it will be difficult to retrieve the milk lost during summer. The cows that calve in periods of greatest heat stress will tend to suffer an increase in the metabolic disorders typical of the post-partum period and will reach lower values of peak production. Moreover, by ingesting less dry matter, they will be more subject to a greater loss in weight, with negative impact on fertility. Negative effects will also be seen on cows in the dry period which, having spent the final part of pregnancy under the effects of heat stress, will show negative repercussions on mammary cell growth, with a consequent reduction in milk production during the imminent lactation and a delay in foetal growth with obvious limitations on genetic and productive potential (S. Thao and G. E. Dahl 2013). 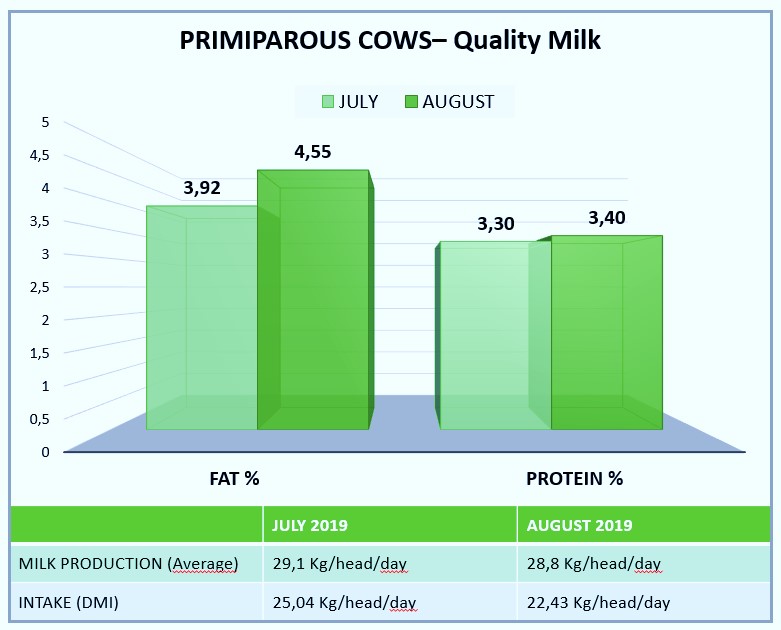 It is therefore necessary to use both livestock management and nutritional preventive techniques in order to limit the negative effects of heat stress and to keep the herd’s performance at high levels of efficiency.

To show that nutritional strategies can help support the performance of cows during the summer months, last summer we tested feed intake and milk quality in a herd located in the province of Novara with 250 lactating cows. During the months of July and August, when temperature and humidity brought the THI to an average value of 76 and a peak value of 81, it was found that the constant use of Biosprint® (5 g/cow/day) improved the cattle’s performance.

The group of primiparous cows who received Biosprint® MUCL™ 39885 for the entire summer period maintained an optimal feed intake and showed an improved fibre digestibility, as a result of the yeast’s beneficial effect on the cellulolytic flora, which in turn improved the milk’s fat content (Graph 3).

The group of pluriparous cows, which did not receive yeast for the entire month of July, suffered a notable drop in feed intake as temperatures increased. Only by adding rations of Biosprint® to the feed was it possible to improve feed intake (Graph 4), production (+3.4 kg/cow/day) and milk fat content (Graph 5) for the pluriparous group as well.

Graph 4: The addition of 5 g/cow/day of Biosprint® to the feed made it possible to improve feed intake levels (+10%), restoring them back to near-optimum values. 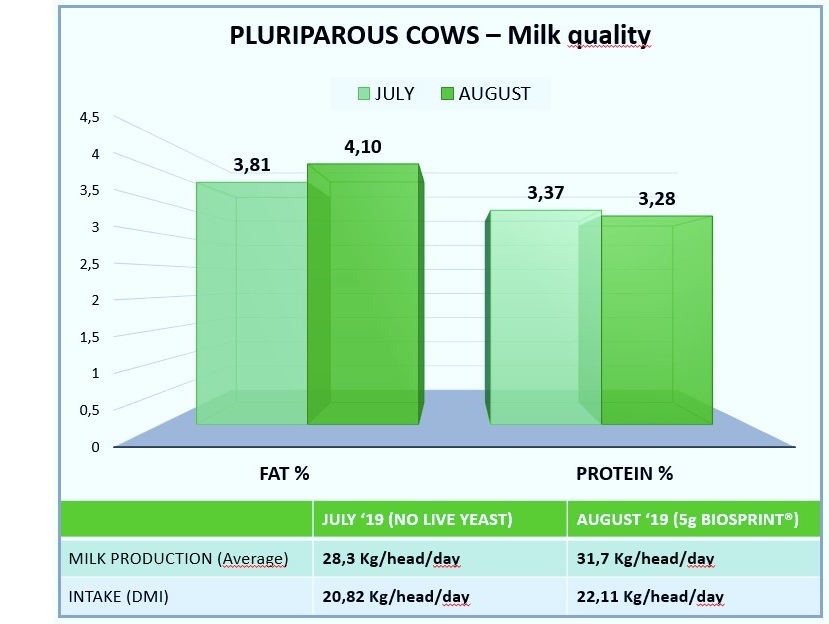 The use of Biosprint® MUCL™ 39885 as a nutritional supplement has proved to be a good tool for helping cows to overcome the difficulties of the summer period, improving rumen efficiency and the herd’s productivity. 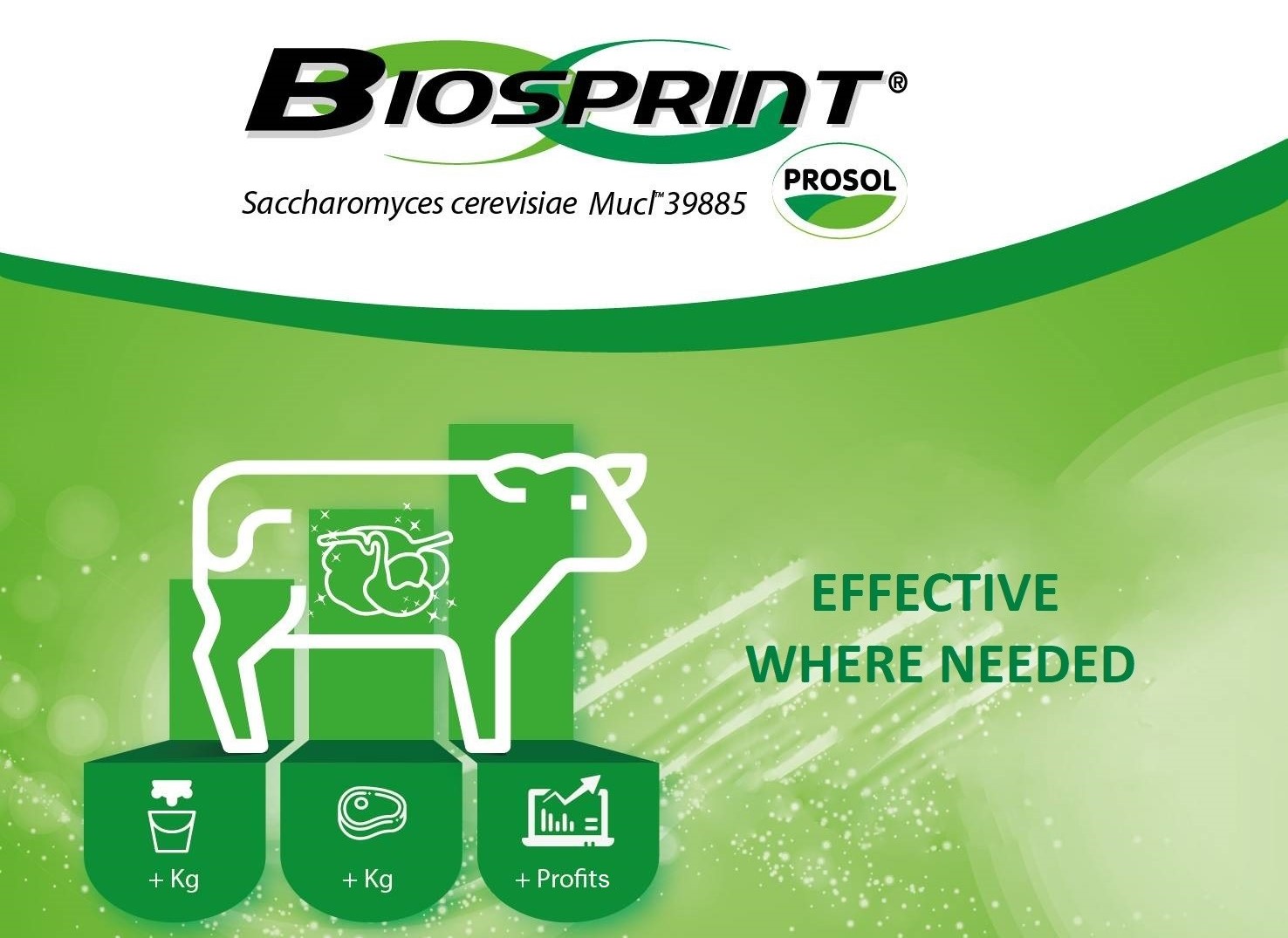 To know more about benefits from Biosprint® contact us