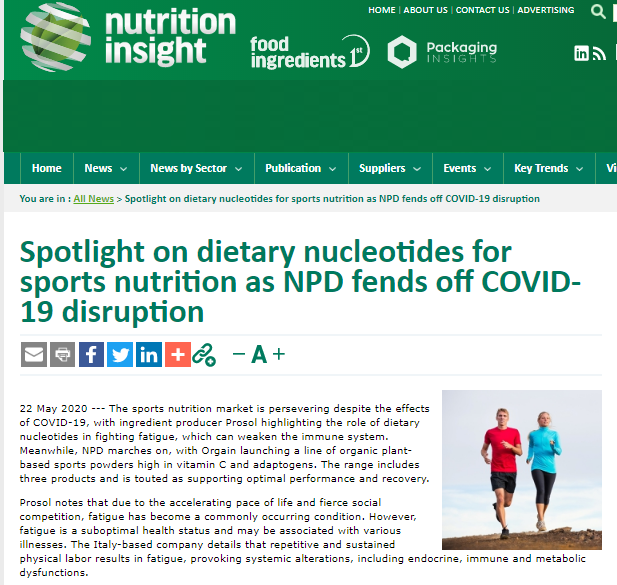 Prosol has been reported on Nutrition Insight about the use of dietary nucleotides for sports nutrition.

“The sports nutrition market is persevering despite the effects of COVID-19, with ingredient producer Prosol highlighting the role of dietary nucleotides in fighting fatigue, which can weaken the immune system.

Prosol notes that due to the accelerating pace of life and fierce social competition, fatigue has become a commonly occurring condition. However, fatigue is a suboptimal health status and may be associated with various illnesses. The Italy-based company details that repetitive and sustained physical labor results in fatigue, provoking systemic alterations, including endocrine, immune and metabolic dysfunctions.

Prosol also notes that several studies have found salivary immunoglobulin A (IgA) – an antibody that plays a role in mucosal immunity – to decrease following a bout of endurance exercise, such as cycling, cross country skiing, running and swimming, and also after shorter intense exercise.

However, Prosol states that dietary nucleotides, which are low-molecular-weight intracellular compounds, can help address many of these issues in sports nutrition by increasing salivary IgA and leading to faster recovery after performances. Additionally, the nucleotides can limit the inflammation process by lowering cortisol levels, neutrophils activation and muscle damage. An anti-fatigue effect can also be seen, with dietary nucleotides inhibiting oxidative stress and improving mitochondrial function in skeletal muscles.

Nucleotides participate in various biochemical processes and are composed of a nitrogenous base (pyrimidine or purine) linked to a pentose (ribose or deoxyribose) sugar to which one, two or three phosphate groups are attached.

According to Prosol, some cells with a high turn-over rate – such as those related to the brain, gut and immunity – are not able to produce enough nucleotides to cover their needs. Therefore, dietary nucleotides may be able to aid intestinal morphology and function, composition of intestinal microbiota, immune response, nervous system, as well as having the aforementioned anti-fatigue effect.”